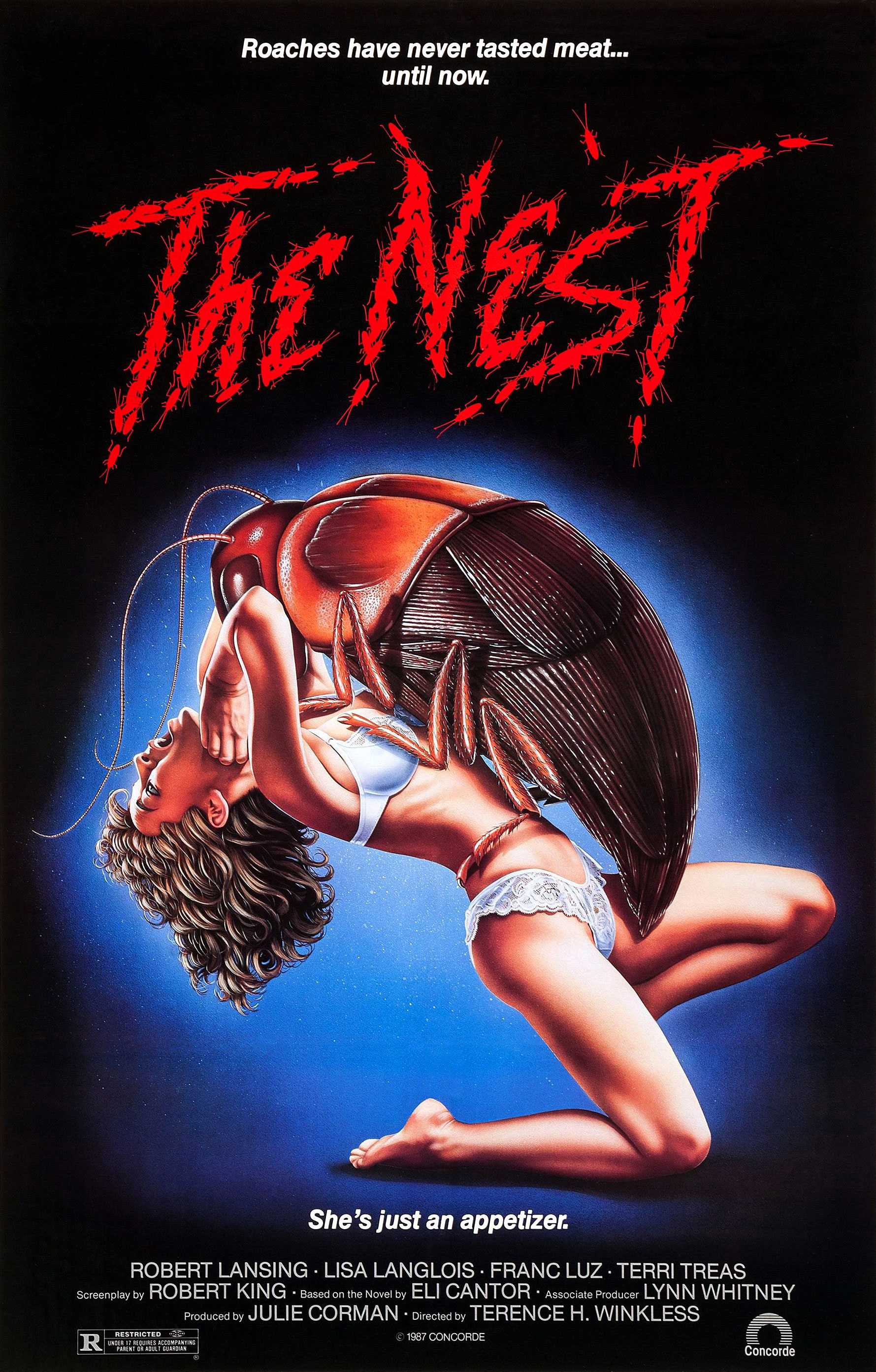 Last night I did a double feature of THE NEST and THE INTRUDER, two 1980s horror movies that I’d somehow missed. The 1980s were the golden age of horror. So how do these two stack up?

THE NEST is a surprisingly well-written, professionally made movie aimed at a theatrical audience. Nice pacing, good acting and an overall decent time at the movies, even if the threat of the film is only extremely vicious cockroaches. Also notable for having a strong female co-lead that is always off having her own adventures and being an effective protagonist without having to wait for the Age of Woke-ness to liberate her. Amazing.

Overall, a fairly well-made and watchable horror movie, I don’t care what Rotten Tomatoes says. Nothing to write home about, but if you’re a horror fan you might want to check it out.

Don’t let the cover fool you, though. There are no giant cockroaches terrorizing ladies in bikinis. Also no bikinis.

THE INTRUDER is another film from the same era. I was lured into watching it because Amazon told me it starred Bruce Campbell and Sam Raimi. Well, not so fast, Amazon. Bruce is barely in the movie, and Sam has a bit part.

This movie feels more like a direct-to-video number, and it has a very small budget — most of which goes to the gore in the second half of the movie. A group of teens are trapped in a small supermarket with a psycho, and the bodies pile up quickly. Not much in the way of character development or plot, but the director makes up for it by trying to live up to his actor, Sam Raimi. I’ve got to give him credit for trying to make bold, fun stylistic choices, even if they don’t always work, and I have to wonder if Sam spent a little time behind the camera on this one.

A total waste of Bruce, though.

However, it was nice to see the actor who played the redneck from Evil Dead II get some screentime. He should have been in more movies.

Overall, not a great movie, definitely the lesser of the two, but well-paced and with some attempt at style.

What should I watch next? I just did Sleepaway Camp 2 the other day (with one crossover actress from The Intruder, interestingly). Tempted to check out Sleepaway Camp 3. So far the series hasn’t been impressive, but somehow it’s fun to see the subpar version of Friday the 13th. It elevates the Friday series to see all the things it does right that Sleepaway does wrong (atmosphere, characterization, plot progression — not normally things I associate with Friday the 13th, but with a similar setting and plot, it’s hard not to compare and contrast).