. . . Ashley Poteet, with her terrific Queen of the Atomic Sea. It’s a very fun image that just pops. Thank you so much for submitting, Ashley, and I hope you have fun with your $100 Amazon Gift Card prize!

It was a stiff competition this month, though, and the prize easily could have gone to any one of these others. The runners up this month were amazing, with an especial favorite being this lion fish mutant from September’s winner, EJ Bouinatchova: 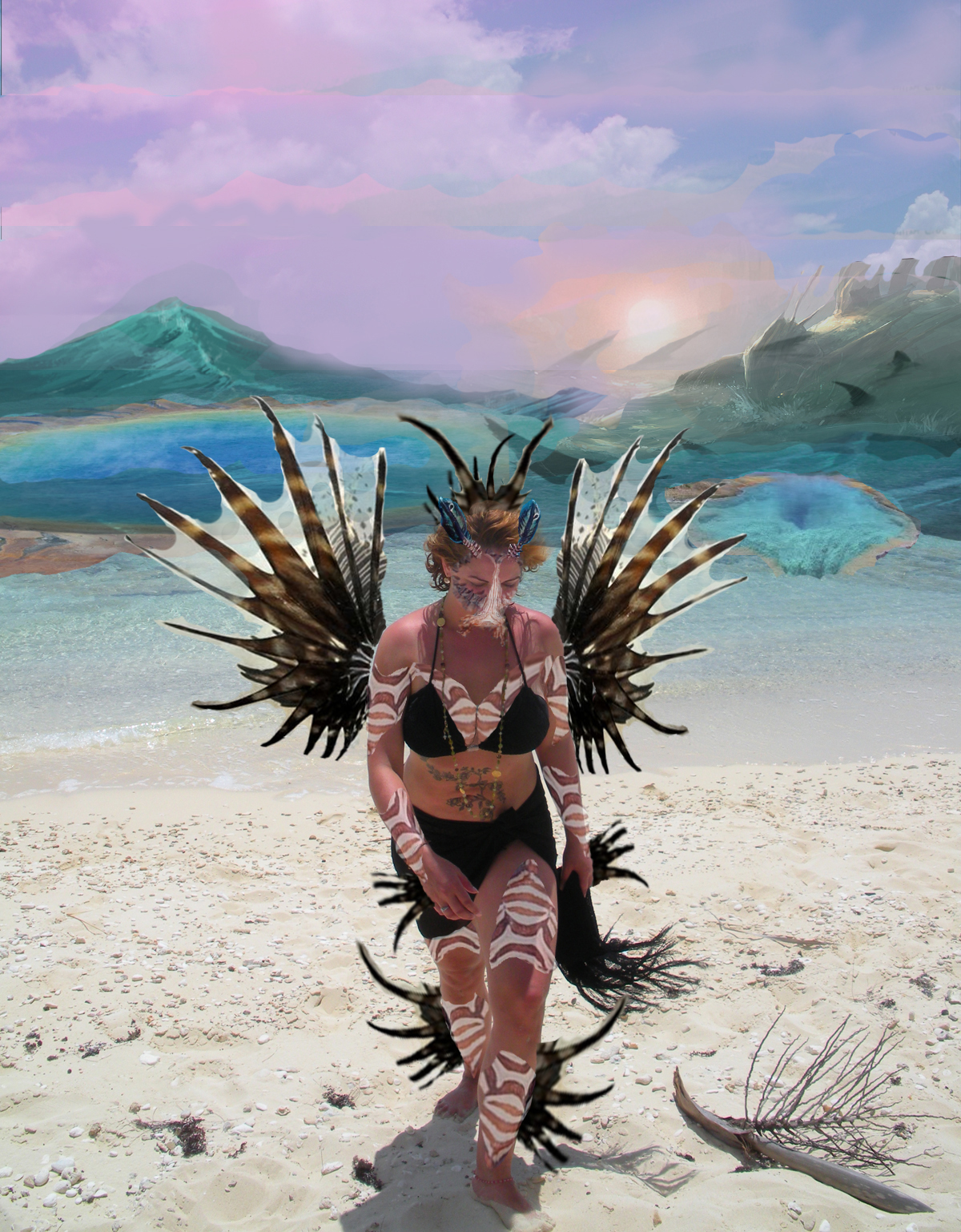 I also love this delightfully creepy eel-man from Lee Benkers: 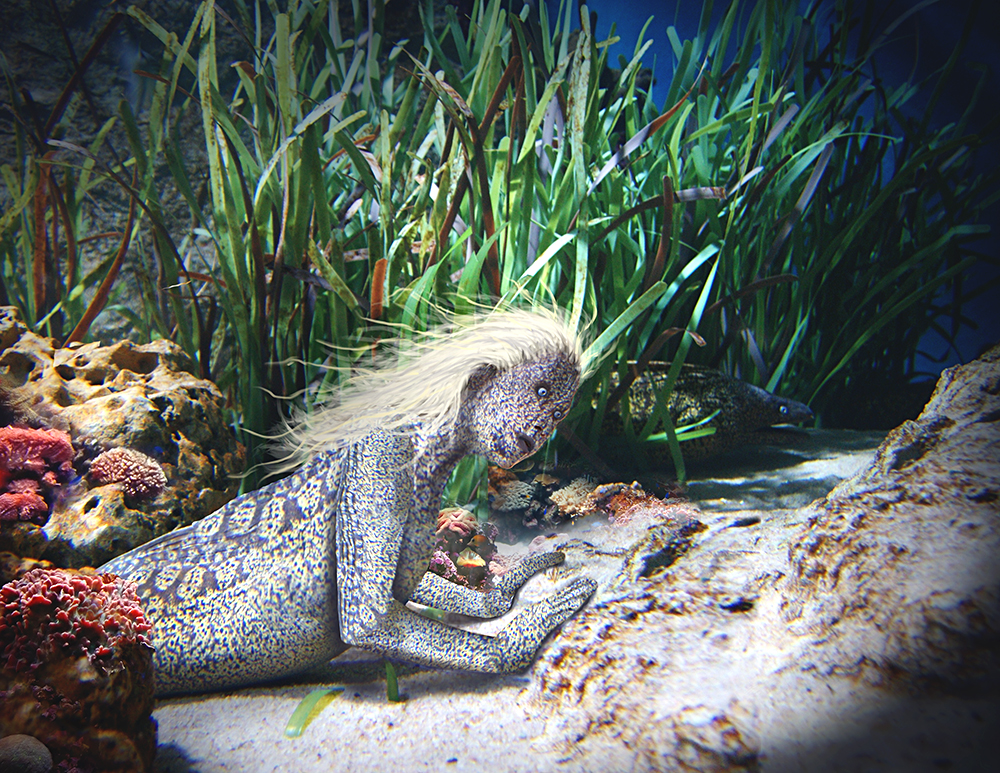 And this is a lovely image from Ahmari Das: 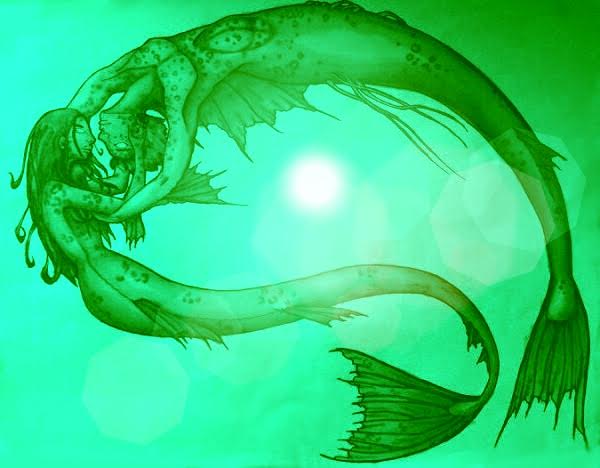 Thank you all for stopping by, and if you’re curious about the books that inspired these images be sure to check out my Atomic Sea series HERE. 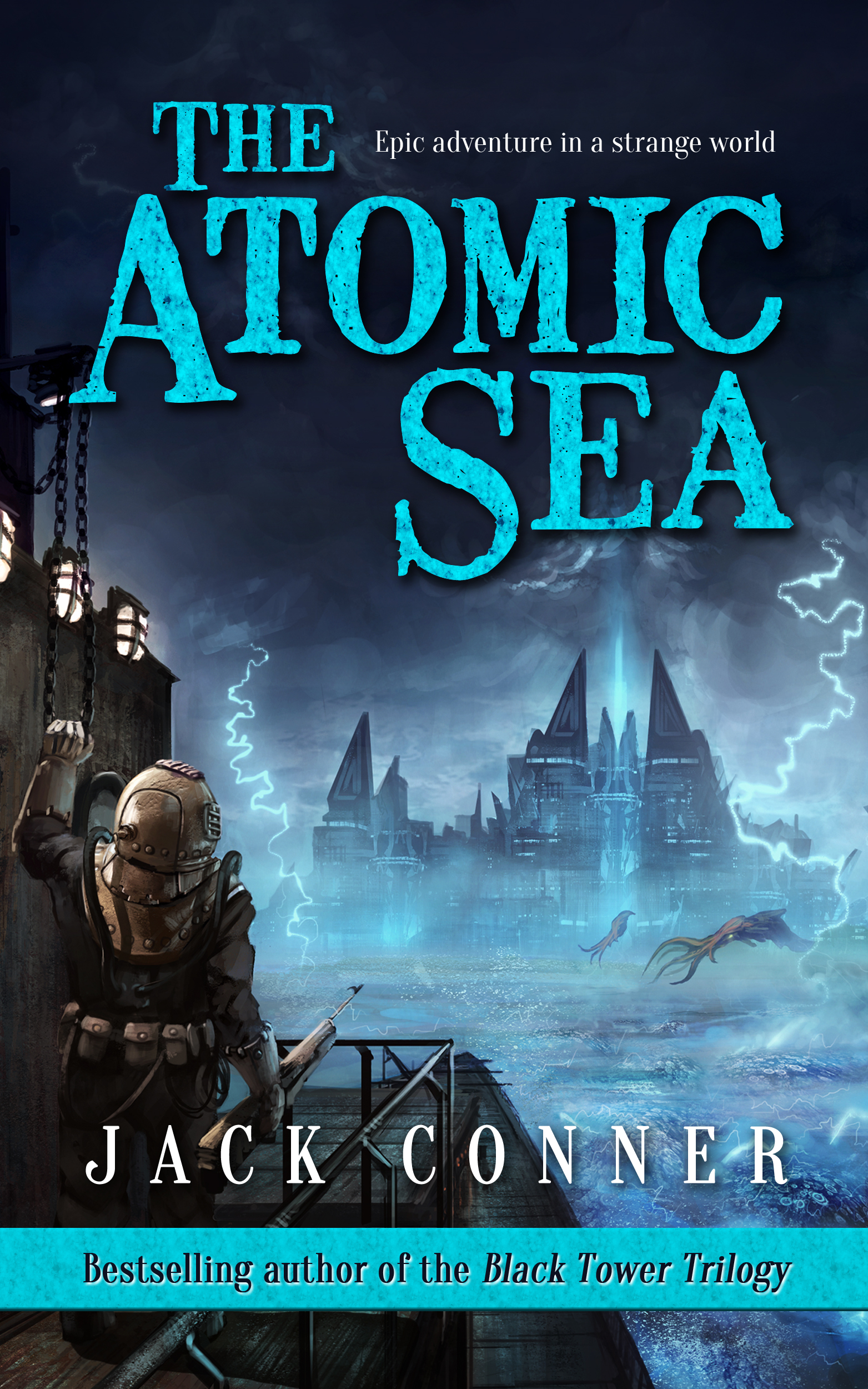 The Atomic Sea: An Epic Fantasy: Part One 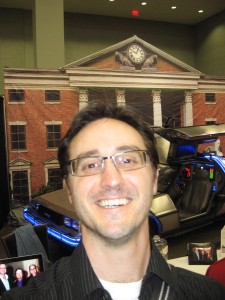 Me at Comic Con

Welp, I’m back from the Austin Comic Con, and it was terrific. The panel I was on went well, and the con itself was a lot of fun. I got to see replicas of the landspeeder in Star Wars, the Deloreon in Back to the Future, etc.

Oh, and I got to shake Bruce Campbell’s hand! Also, he served me a drink. After the screening of “Ash vs. The Evil Dead” at a bar on 6th Street (a street famed in Texas for its endless bars), Bruce Campbell jumped behind the bar and started serving drinks to the patrons. Sadly, I didn’t get a picture of him (unlike everyone else there), but please enjoy a picture of me smiling goofily at the “Back to the Future” presentation.

This month’s winner of the $100 Amazon Gift Card is Mark James Featherstone with his wonderful image of a Collossum priest. 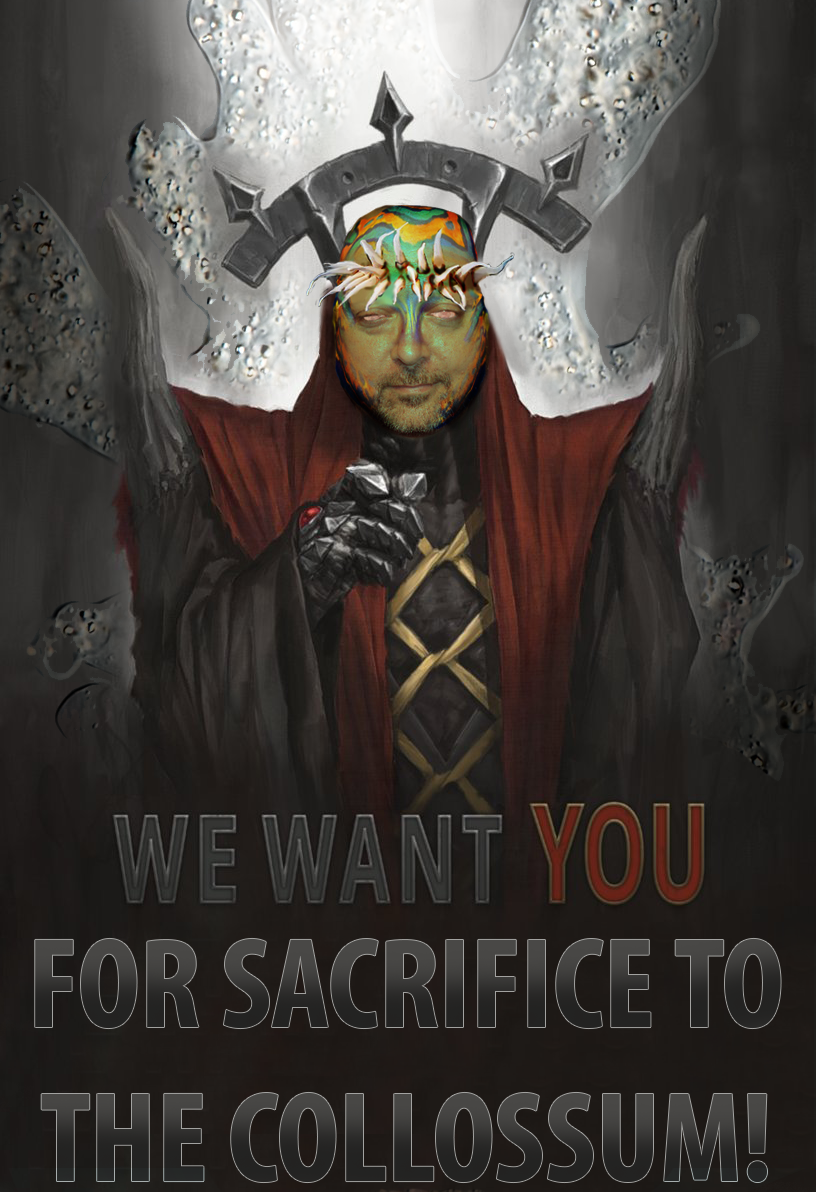 Here are some of the runner-ups. The first is a wonderful mask made by Paul Hyson: 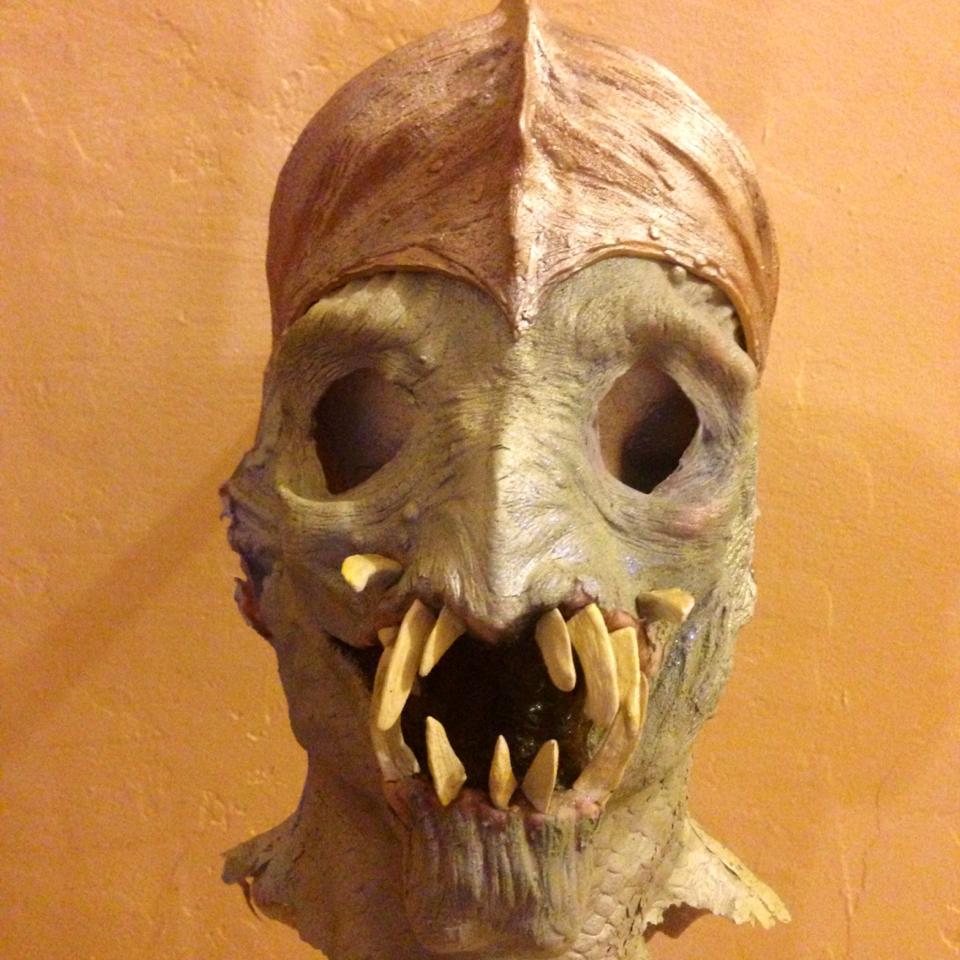 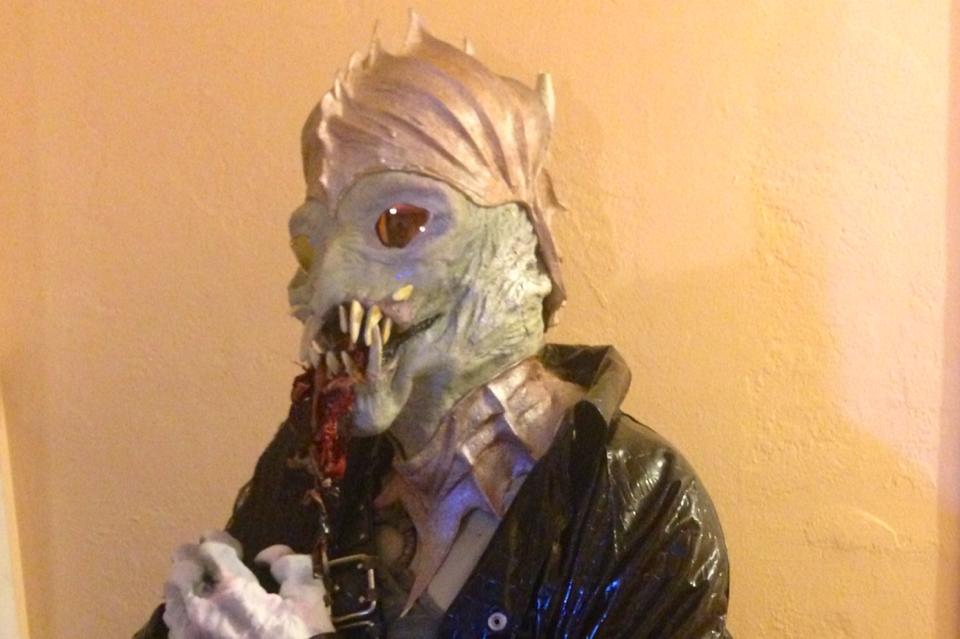 Next we have a cool sketch by Johan Tieldow: 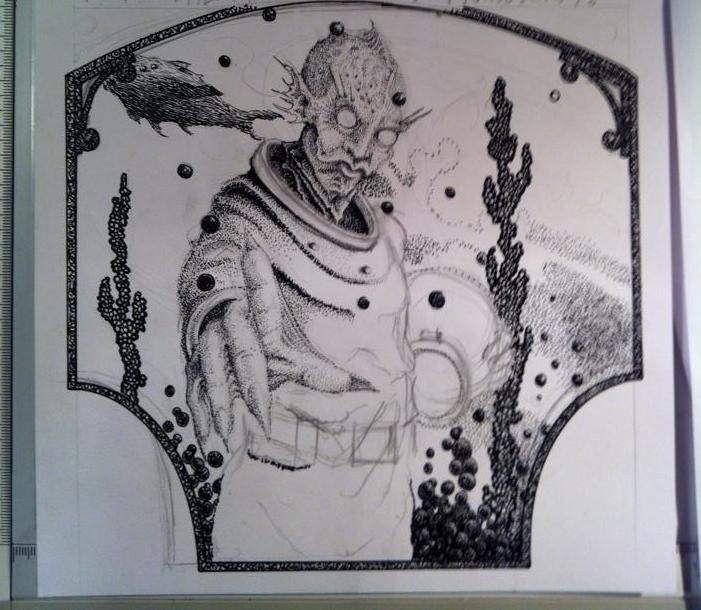 Finally a saucy and sinister variation on the mermaid by Ashley Poteet: 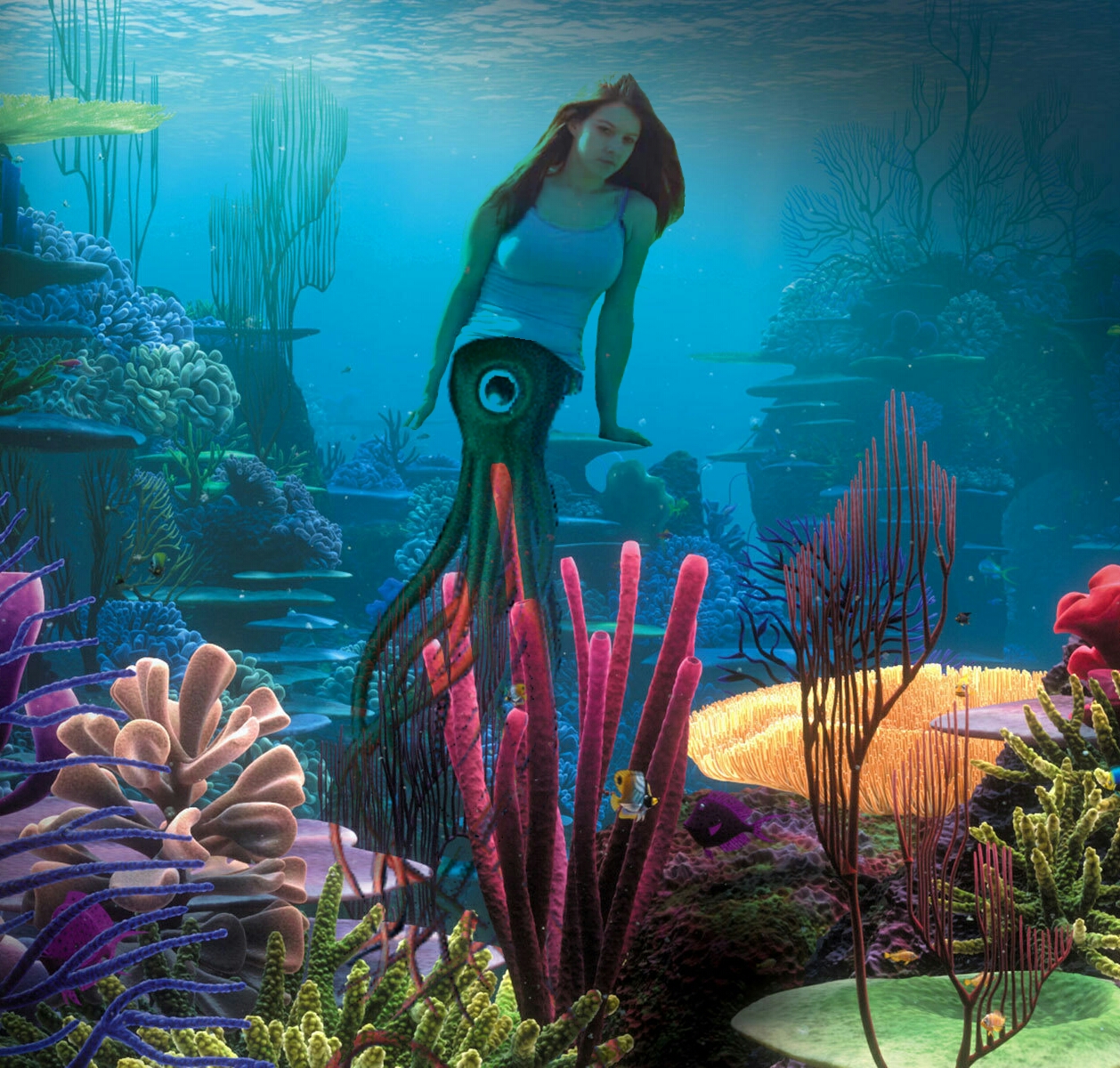 . . . E. J. Bouinatchova! This is such a lovely image, graceful yet eerie, complete with a sense of mystery and wonder . . . but maybe a little horror, too, just out of frame. This is the kind of picture that makes me want to know the story behind it. What exactly is going on in this image? Awesome job, E. J.! Thank you so much for joining in the fun this month, and I’m proud to present you with a $100 Amazon Gift Card. Woo-hoo! Hopefully this will just be the start of many more Monthly Mutations to come!

Oh, and here are a couple of runners up. Great jobs, Rik Sowden and Mark James Featherstone (respectively)! 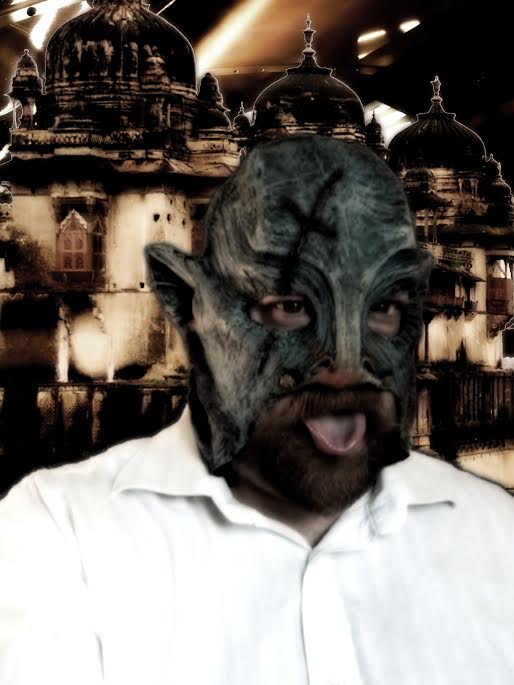 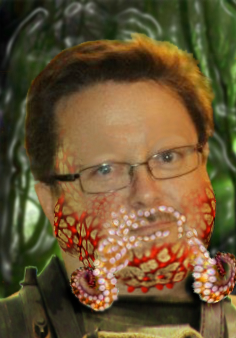 The Fantastic Four movie fascinates me. I saw it Friday and I still can’t stop thinking about how this movie, with this script (if indeed this was the original script), got made. (Spoilers ahead) I mean, it had essentially no second act and it barely had a third act. The movie was all first act, with the characters getting their powers, and then . . . well, that was pretty much it, except for a short and anticlimactic showdown that wasn’t set up at all.

I know there is supposed to have been trouble behind the scenes, but . . . no second or third act? Really? Just what sort of trouble was this? Did the executive producer lose a bet? This is just basic stuff, how you structure a story. These guys know at least this much. That’s their job. The heroes get powers, wrangle with the bad guy, who might also be getting his powers in the first movie, there’s some back in forth in the second act, the stakes get elevated (think the Green Goblin almost killing Aunt May in the first Spiderman movie), then the villain is about to achieve his goal and the good guys stop him in a big, climactic showdown.

That’s it. That’s your story. That’s pretty much every superhero origin story. It’s not rocket science. The details will vary (they better!), but the act structure remains constant.

So . . . what happened with Fantastic Four?

How . . . HOW did this movie get made? I’m really hoping for a documentary on the behind the scenes of this movie someday, because I’m am soooo curious.

Because this movie had potential. The first act, which was most of the movie, was just fine, if overly gritty and with teenage characters that should have been adults. But it was written, directed and acted just fine. It was a real movie. Until the first act ended, and then it wasn’t. But that first act shows that there were real writers and a real director at work on this thing, and they paid attention to details and pacing.

So what then? I’m not being snarky, or at least I’m trying not to be. I’m honestly curious. HOW did this movie get made, or at least released? If a movie isn’t ready, a studio will often hold it back until it is. So who thought this was ready?

I’m officially announcing the launch of my new contest. I call it the Monthly Mutation. I’ll give everyone on my newsletter subscriber list, along with all my Facebook friends, the chance to send in photos / drawings / digital manipulations of themselves or others infected by the Atomic Sea. That’s right, soon you’ll have the perfect chance to make yourself up as a fish-person!

The contest will be held one week every month, and the winner will get a signed print edition of T…he Atomic Sea: Volume One. The print edition encompasses Parts One and Two of the ebooks. I might also throw in an Atomic Sea T-shirt.

I’ll go first. I’ve already made my appointment with the make-up artist for the first week of August. Soon you’ll get to see what I look like as a fish-man — woo-hoo! I’ll put the picture up on my Facebook page and on my website, and that’s where I’ll post photos of the winners of the contest, too.

You don’t have to get that fancy. You can just slap a few fish scales on with make up or wave a foam fin, or you can draw yourself as a fish person or use the computer to do it. It’s up to you. You can go for the gross-out or the beautiful, the complex or the simple. I can’t wait to see what people come up with.

Has anyone else seen Sense8? I just finished watching it the other day and found it a fascinating meditation on narrative, character and gender. If you enjoyed Cloud Atlas, Sense8 is probably for you. It is very much a continuation of those themes and that style of storytelling–different characters in different parts of the world, blurry gender roles and sexuality, shadowy forces out to get our heroes, etc. It’s a bit slow, but deliberately so, and beautifully realized. It’s not for everybody, but it is unlike any other television show that has gone before. I didn’t love it, and I didn’t devour it as eagerly as I do some other genre shows, but I found a lot to admire about it, even if I did have to look away during the mass-birth montage. It is certainly an epic piece of art, and kind of brilliant.

That said . . . to enjoy the show, you do have to have a strong tolerance for certain things, like gay stuff and a slow build-up, and that’s why I say it’s not for everybody. But if this is the sort of daring, quality stuff that Netflix intends on producing, I’m excited for what comes next. 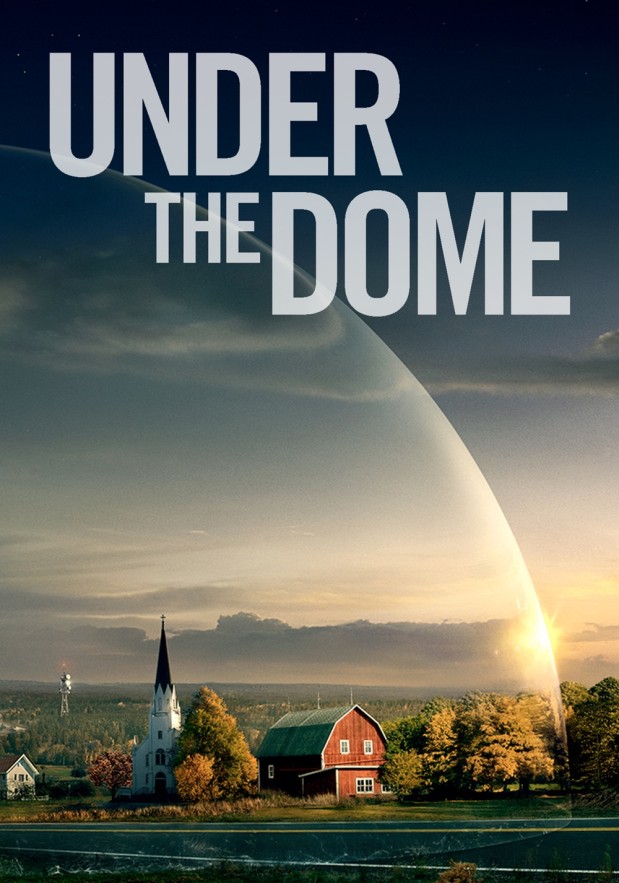 Okay, so I just finished Stephen King’s epic fantasy / sci-fi novel “Under the Dome”, and my reaction is very mixed. A lot of the book was fun and remarkably fast-paced for King. But then we get to the ending . . . ugh. I won’t spoil it for those who haven’t read it, but it left me deeply unsatisfied–and quite annoyed. Think “The Stand” levels of terrible endings, but maybe even worse. I’m used to King being unable to stick the landing, but . . . dang. Has anyone else out there read the book (s) and come away with a different impression? 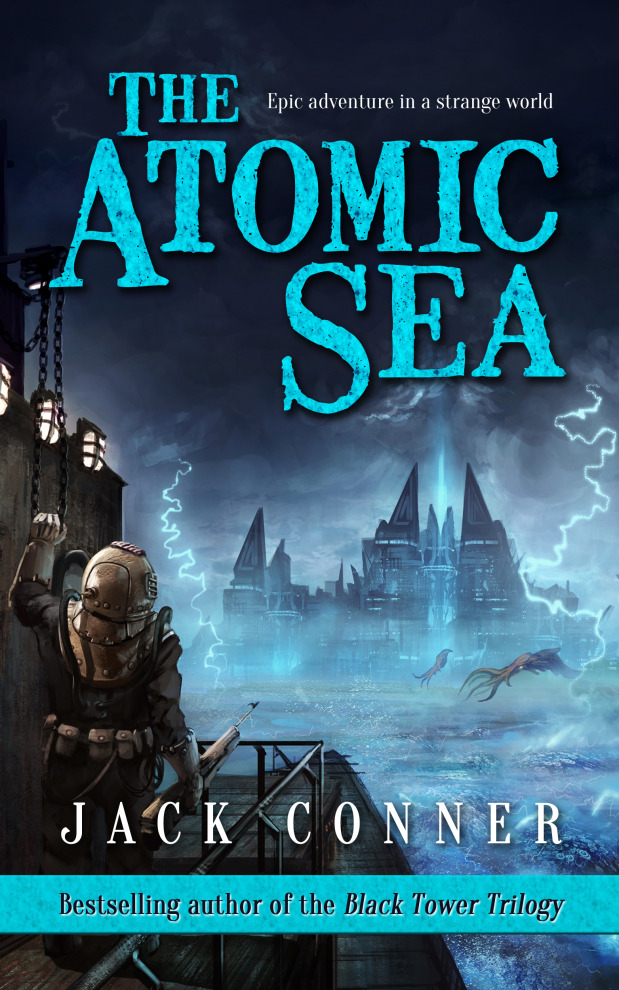 That’s right, the first volume of my epic fantasy / science fiction magnum opus is long-listed for a SpaSpa Book Award for the year 2014. I’m so excited I nearly spilled my coffee when I saw it.

To see it for yourself, check out the fantasy category here: http://bookhippo.uk/awards/longList2014.php#fantasy

Wish me luck, guys! “The Atomic Sea: An Epic Fantasy / Science Fiction Series: Part One” could win a book award!

Check out the book here: http://www.amazon.com/dp/B00QH3SE0C

Imagine the epic fantasy adventure of “Lord of the Rings” blended with the cosmic strangeness of China Mieville or Jeff Vandermeer, and you’ll have some idea of the wonders and delights awaiting you in “The Atomic Sea”, a brand-new series by bestselling author Jack Conner.

A thousand years ago, the sea changed, becoming strange and unnatural, and in the process transforming the world. Now, with the Empire of Octung plunging the world into a terrible war, only one man — Dr. Francis Avery — and his rag-tag band have a hope of ending the chaos and, once and for a all, uncovering the mystery of the Atomic Sea.

Dr. Avery is out on the sea serving as the doctor aboard a whaling ship when a most curious patient is brought to him — a beautiful woman fished out of the Atomic Se, who has survived the horrors and poisons of the water, and who carries a secret that could either save the world or damn it. At the same time, murders have been occurring aboard the ship — there’s a spy for Octung aboard. If Avery doesn’t save the woman from the killer and help her achieve her ends, the whole world will be plunged into nightmare.

This is just the beginning of the incredible adventure waiting in “The Atomic Sea: An Epic Fantasy: Part One”.

If you enjoy original works of epic fantasy and science fiction, you might just love “The Atomic Sea: An Epic Fantasy / Science Fiction Series”.

I’d gone to visit my mom in the country for the holiday weekend, and we were to have a lunch on Sunday with some other family members, when the storm came, and it was pretty wild. Flash floods, multiple tornados, earthshaking thunder. The power went out. My mom’s smart phone kept on receiving warnings telling us of flash floods and tornados, and she called her sister, who lives in a nearby town and still had power, and SHE was tracking the first tornado . . . which was very close to my mom’s house. Actually it was over at Hamilton Pool, which is a beautiful natural lagoon. Anyway, so my mom and I gathered our pets in the central hallway, piled mattresses on the floor to throw over us if the tornado came, and had flashlights and candles all around — I actually used my Kindle as one of our lights.

Well, the tornado went north instead of west, so it missed us, but it came very close. Meanwhile we were still without power and it was a raging river outside. Then ANOTHER tornado was reported in the area, and then another. My mom and I played board games.

The next day our family lunch had to be modified, but we were able to do it, and I went home the long way, as the river had flooded the bridge I normally would have left by. We went to see the river, which was pretty wild.

I’ve heard that 13 people (as of this count) died in the flooding. Rest in peace.