“Snowpiercer” was a very good movie (though I wouldn’t recommend it to just anyone), but it’s odd to think of it being made into a TV show, and yet that’s what’s happening.

I haven’t read the graphic novels, so maybe the source material lends itself to TV more readily than the movie does, but at the moment I’m having a hard time picturing this. Perhaps they’ll invent some mechanism whereby passengers from the rear of the train can move about the train at will, thus allowing characters to have more dynamic experiences. I would hope so. On the other hand, that would sort of kill the premise of the story, so maybe not.

But without that mechanism, how can this work? I suppose they can *leave* the train at some point, allowing characters to escape the confines of the “ghetto” of the rear of the train for brief periods. We wouldn’t want an entire series focusing on the misery at the back of Snowpiercer, would we? And the people forward of it are pretty much evil, so not many of them would be main characters.

At any rate, I’m certainly curious how the show will shake out. Although at this point I’m getting tired of the movie-to-TV train. Original ideas are getting even scarcer than before, it seems. Everything has to be based on some preexisting material or brand.

But what do you think? 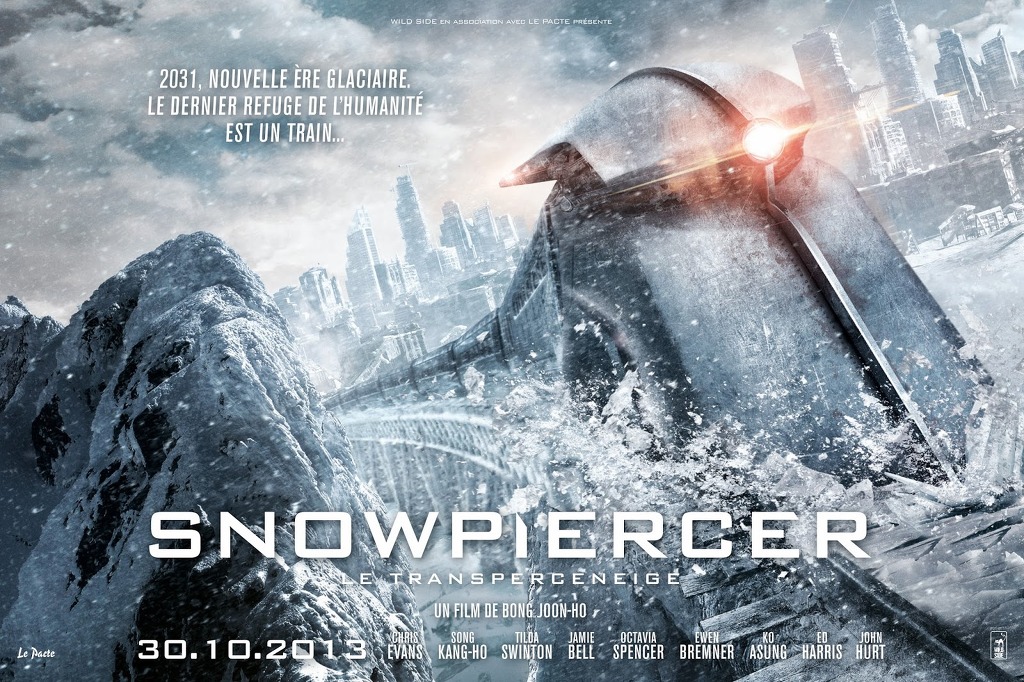 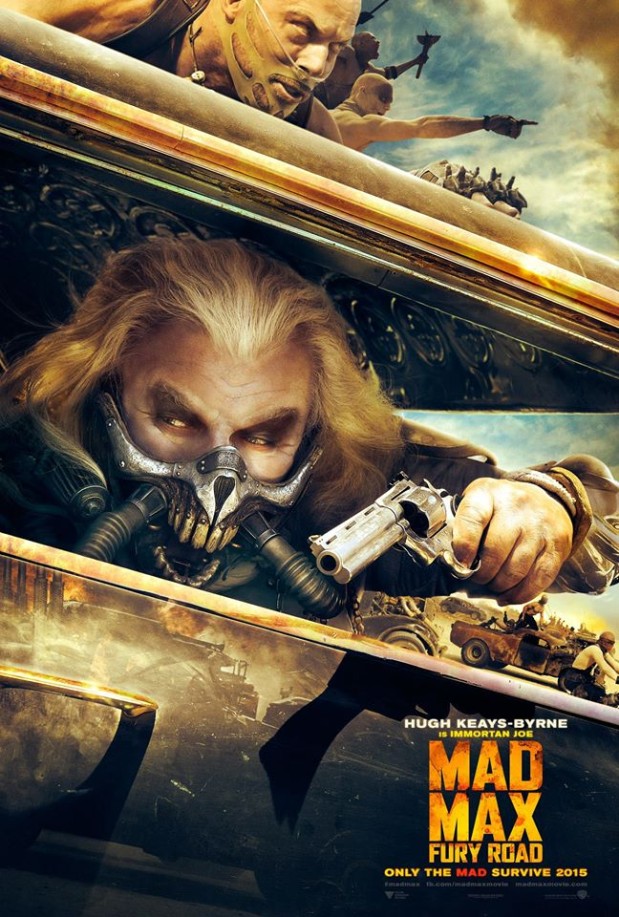 I saw “Mad Max: Fury Road” again yesterday, this time in 3D. I haven’t seen a movie twice in one weekend in awhile. It’s still amazing, although nothing can compare with that first-time jolt of adrenaline. One interesting thing I noticed that I missed the fist time — in the opening credits, Furiosa’s name appears on the same screen as Mad Max’s, but higher, although his name is on the left. But with hers being higher, they really do seem to have equal billing. Rewatching it, I was less bothered by Tom Hardy’s Mad Max voice, which seemed to vary in accent and inflection on the initial viewing but just seemed like his voice (however odd) on the second. Has anyone else seen it twice? 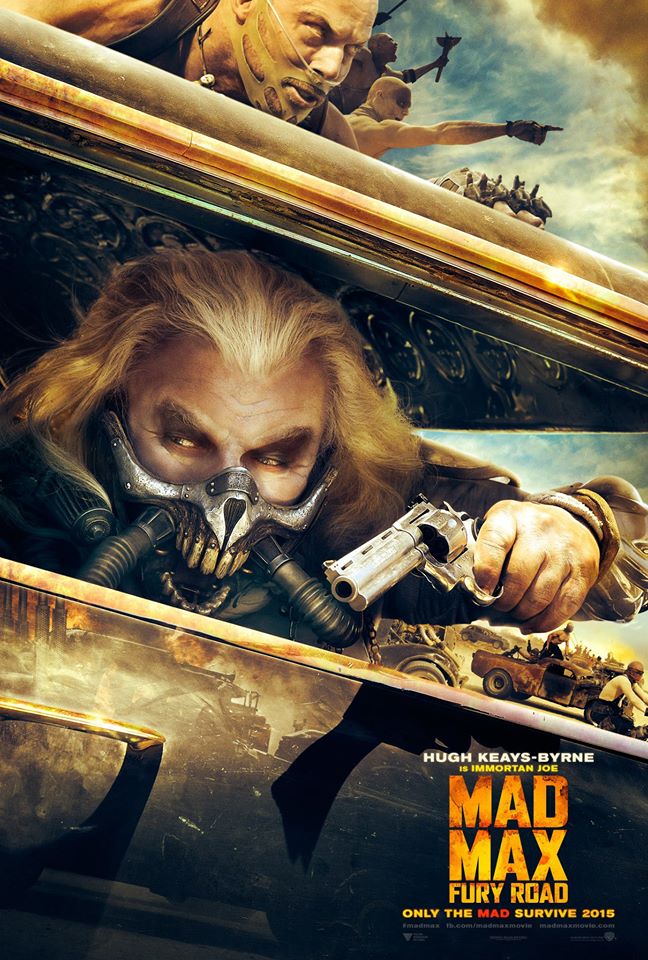 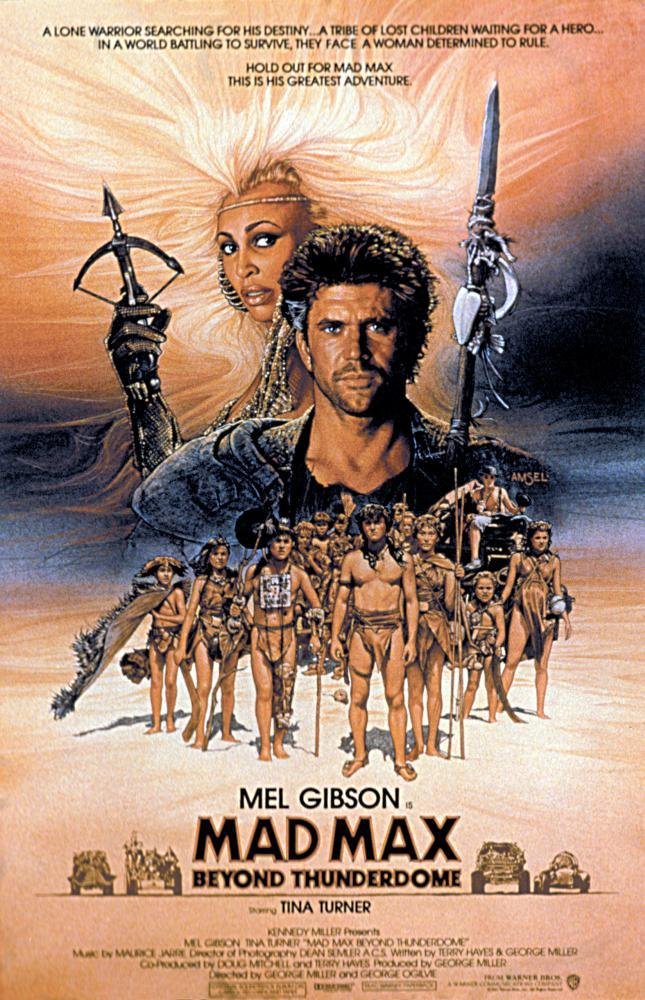 After watching “Mad Max: Fury Road” yesterday I was jonesing for more Max, so I popped in “Beyond Thunderdome” (I had just seen “Road Warrior” a few days ago), and I enjoyed it a surprising amount. Part of this was surely still being on the Fury Road High, but I think the bigger part came from finally “getting” it. I had never liked “Thunderdome” much before, although I had very much enjoyed the first third of it. When the attention shifts from Bartertown to the Lost Boys and Girls, I’d previously felt let down and irritated. I wanted more post-apoc mayhem and raiders, not kids! And so I’ve always felt toward “Thunderdome”.

Last night it hit me, the formula for all the Mad Max movies, and once the formula clicked in my head I was okay with the Lost Boys and Girls (LBaG) from “Thunderdome”. The formula is very simple: Max encounters post-apoc bad guys (who often wear black), setting up the threat; later Max encounters idealized good guys (who often wear white and have blond hair) who need his aid; Max resists helping; good guys are threatened by the bad guys; Max helps; good guys prevail. Max goes on alone.

Once I realized this formula, shortly after Max arriving in the valley of the LBaG in my rewatch of “Thunderdome”, I knew what to expect from then on and was actually pleased. Usually I hate formula and knowing what to expect, but somehow this was different. This was making sense of the previously annoying and bewildering plot turn of “Thunderdome”, where it went from awesome post-apoc villainy and action to . . . babysitting. No one wants to see Mad Max babysit. But once I realized the kids were the George Miller Idealized Good Guys (GMIGG) and were about to be thrown into conflict with Tina Turner’s Bartertown Baddies (TTBB), I was okay with it. I could enjoy the surreally perfect valley of the LBaG, just as I enjoyed the surreally idealized good folk in “Road Warrior” and the angelic beauties of “Fury Road” . . . and I could especially enjoy it knowing they were about to be thrown into the ring with TTBB.

Which they are, quite soon, even if the plot gets a little wonky at that point.

Max helps, there’s adventure, vehicular mayhem, and the ending is (no spoilers) typical Max. The ending’s tone isn’t quite as grim as Road Warrior, and I kind of wish it was, but it’s about the same content-wise. Anyway, typical Max.

There’s a couple of plot issues that I couldn’t resolve, though. Why did they need Master? The kids didn’t set out originally to find him, so why did Max suddenly decide they needed him? That whole thing seemed to come out of nowhere. Yes yes, I can see how Master would be helpful in rebuilding the fallen society, but this was never addressed that I can remember. It was never set up as a goal by Max or the kids: “Hey, there’s a guy that has the knowin’? Let’s go get him!” None of that.

That aside, it was a pretty decent movie. What I love most about it, other than the post-apoc mayhem, is the style. It’s done in a brilliant 80s high-adventure style, comparable to Speilberg or Lucas, and it’s marvelously done, with tight zooms, epic panoramas and tension in every frame. The first third of it feels like the Jabba’s Palace portion of “Return of the Jedi”.

All in all, I quite enjoyed my return to “Thunderdome”. How long will this enjoyment last? Once the Fury Road High has died down and I rewatch the movie someday, will I still dig it? Time will tell.

So does Darth Vader come back to life for the new Star Wars trilogy? In the new trailer, Luke’s voiceover uses the present tense when describing his father. At first I just thought that since that passage is taken from Return of the Jedi, that it didn’t mean anything. But that LAST line, “and so do you”, indicates that the passage may actually be taken from the NEW movie. Which means that Luke considers Vader to still be alive. And then there’s that melted helmet. Why bring the helmet into this if Vader doesn’t actually show up? At the moment I’m thinking Vader DOES come back to life in Star Wars: The Force Awakens.

HERE is great write-up about the new mega-franchise coming our way, and one I’m really excited about — the Alien/Predator/Prometheus franchise. I love the idea of them trying to Marvel Universe-ify these stories and I’m fascinated by how it will turn out. Could we really see three big budget sci-fi horror series produce regular entries with occasional cross-overs and team-ups (or whatever the equivalent would be)? My mind boggles. But it sounds so cool! I’m waiting for the other shoe to drop, though. For instance: “They’ll all be rated PG-13”! Please be good, please be good.

I love the Alien franchise quite a lot, or at least the first two, and I’m very fond of “Predator”. I kind of love “Prometheus”, with some caveats — I wish the main character was better-realized, for example. That said, there were two terrific characters in that movie that I’m thankful to have in my head: David and Charlize Theron’s character (I forget her name). Both actors were on fire in that movie and their characters were amazing (whether I can remember their names or not). I can’t wait to see David in P2.

There are a lot of ways these new movies could go bad, though. For example, allowing Alien 3 and 4 to be canon. As far as I’m concerned, they shouldn’t exist in the new universe. They were bad, and they killed off all the characters, or turned them into half-mad clones. “Predators” introduced some mythology that may not jive with the tone of the original movie, and perhaps it should be excised from canon. Predator 2 obviously establishes the link between the two franchises, Alien and Predator, although not perfect it’s a fun movie and can stay, as far as I’m concerned.

Anyway, this whole idea sounds like a blast, and I can’t wait to dive back into this universe . . . provided that shoe stays right where it is.