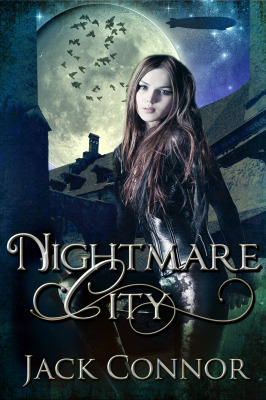 When beautiful young thief Katya goes on the run from a loan shark in the terrifying dystopian / steampunk city of Lavorgna, the last thing she expects is to be plunged into an epic adventure that will determine the fate of the world, but that’s just what happens in “Nightmare City”.

Nightmare City is a weird horror/action/steampunk tale about a young and beautiful thief named Katya who goes on the run from a deal gone wrong and winds up tangled up with mob bosses, mad scientists and Lovecraftian horrors. Something awful is rising up beneath the city streets of Lavorgna, a place which is already scary enough. The undead and homunculi walk the streets, mob bosses vie for power with cults, and the dread Guild of Alchemists rules over all.

Katya uncovers a horrible secret and realizes that she alone can save the world from an unimaginable horror, but it won’t be easy when she has to dodge a mad scientist, a horde of zombies and even worse creatures, not to mention the vicious mob war that takes just that moment to erupt.

Look Inside
Disclosure of Material Connection: Some of the links in the page above are "affiliate links." This means if you click on the link and purchase the item, I will receive an affiliate commission. I am disclosing this in accordance with the Federal Trade Commission's 16 CFR, Part 255: "Guides Concerning the Use of Endorsements and Testimonials in Advertising."